Each year Boston Buddies attends several Adoption Fairs held throughout Southern California. Adoption Fairs provide a great opportunity to meet lots of new people and make new furry friends of all shapes and sizes.  They are also a great place to find new and unusual toys, clothes, beds, leashes and collars for your own Buddy!

MEET SOME OF OUR BUDDIES:

When we attend an Adoption Fair we try to bring as many of our current adoptable dogs as possible, depending on where they are all located.  Many times those of us who staff the booth will bring along our own dogs, several of whom are Boston Buddies Alumni to enjoy the day as well.

BRING YOUR BOSTON BY TO SAY ‘HI!”

We always enjoy when people stop by to visit with us and the dogs and we LOVE it when a Boston Buddies Alum comes by with their new family to say hello and let us know how they are doing!

A FUN WAY TO VOLUNTEER:

We are always looking for volunteers to help us staff the booth on Adoption Fair day and to transport dogs to and from the venue.  If you’ve ever thought about volunteering this is one of the easiest and most fun ways to really help and find out more about rescue in general and Boston Buddies in particular.

Check our website often to see the Adoption Fairs we are scheduled to be at throughout the year and Contact Us if you would like to volunteer at any of the Fairs!

There are currently no planned upcoming Adoption Fairs

PAST ADOPTION EVENTS
Below is just a small sampling of the Adoption Fairs we have attended over the last decade. Hope to see you and your four-legged kids at our next event! 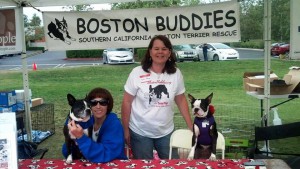 For more photos of the event and all the adorable Bostons who attended, check our our Facebook Photo Album. 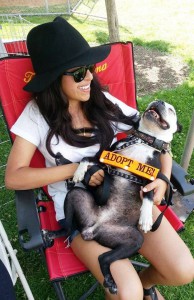 This was a fantastic event – our favorite adoption event of the year – with lots of animals and rescue minded people wanting to be part of the solution and help Los Angeles become No Kill. There were lots of vendors and they always have some of the best Food Trucks around – thank you to all who made a day of it and stopped by to say hi!

The Best Friends Animal Society Super Adoption Festival is a twice yearly event and is the largest pet adoption event in the country with representatives from over 60 local animal rescue organizations, including Boston Buddies, and municipal shelters offering pets of all types and sizes for adoption to the public.

Karen and Rocco arrived at the La Brea Tar Pits early in the day to set up the Boston Buddies tent and Hope arrived just a short time later.

The rest of volunteers and dogs soon thereafter and got ready for another fun Adoption Fair day!  Betty brought her dog Bowser to enjoy the day and Kathy and Jack brought Lucy up from Newport Beach with them.  Katie and Jennifer came by to help out for a few hours in the booth and ended up staying most of the day!  Rachael and Michael came by to say hi and help out too.  The crowd was smaller than usual this year, but we still had a lot of people stop by to say hello to Hope, Rocco and Lucy and learn a bit more about Boston Buddies.

Hope had a great time prancing around saying hello to everyone, showing them how far she has come since she left the shelter.  Hope got so tired she had to lay down for an afternoon nap – and she still had admirers while she slept!

Rocco had a great time out at his first event like this. He made a lot of new friends and even helped a few people eat their lunches!  He was so tired at the end of the day that he slept all the way home to his foster mom!

Each time Lucy would go out for a walk around the Festival she would arrive back at the booth with a trail of people behind her!

It was another great day at a Best Friends Adoption Festival.  We met so many nice people and the dogs enjoyed being the center of attention. 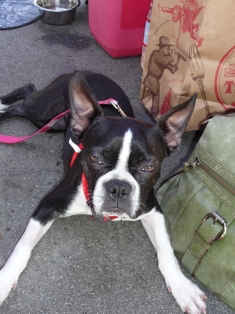 Jasmine at the Faire 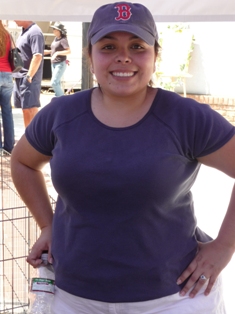 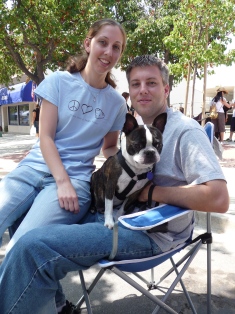 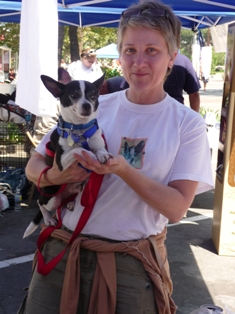 April Helping Out in the Booth,  Dawn, Brian and Baby, Betty and Truman Enjoying the Day

Baby, Jasmine, Oscar and Truman all made an appearance at the Boston Buddies booth and met many new friends during the day.  Several people submitted Applications and indicated interested in adopting a Buddy!

There were several dog rescues in addition to Boston Buddies in attendance, as well as horses, guinea pigs, pot-bellied pigs. llamas and alpacas.  The weather cooperated and everyone had a delightful day at this animal friendly event hosted by the Old Towne Yorba Linda Merchants’ Association and Dr. Rachele Baker, of Yorba Linda Veterinary Hospital. 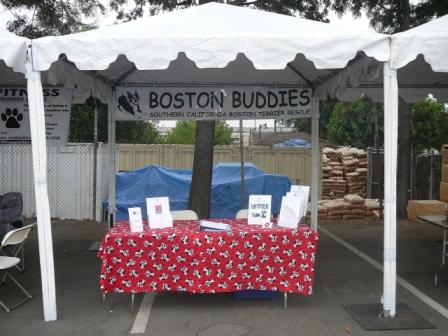 Boston Buddies had a booth at the Fair alongside other rescue groups as well as numerous vendors and other animal services companies.

Kathy and Karen manned the booth while Boss served as the perfect gentleman ambassador for Boston Buddies saying hello and giving lots of Boston kisses to all who stopped by to say hi! 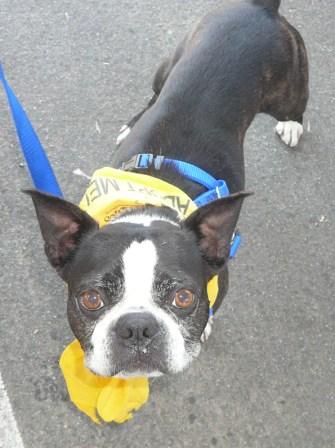 We met several people who were interested in adopting a Boston, either now or in the future, and we had a great time “talking Boston” with them. Several other people stopped by to say hi to Boss as they left with their newly adopted shelter dogs – we could not have been happier to see all these lucky dogs go home with their new families!

By the end of the day Boss was exhausted and could barely keep his eyes open.  He slept all the way back to his foster home, dreaming of the day he finds his forever home. We all wish that Boss’ dream comes true in no time at all!

It was a beautiful day in a beautiful park in Beverly Hills. Boston Buddies had five of its Charter Members attend the June 14, 2008 Adoption Fair sponsored by the Pet Care Foundation.

Audrey, Lucy, Boss and Bessie all came to spend the day and say hi to all  who attended.  While there weren’t a lot of groups in attendance, there was a lot of action in the Boston Buddies booth as many of the wonderful rescue minded folks who attended the fair stopped by to say hi and spend some time with dogs.

There were booths and volunteers from several private rescue groups as well as both the City and County shelters – and lots of great dogs besides the Boston Buddies’ crew.

By the time the fair was over both Bessie and Boss could barely keep their eyes open they had had such a full day of meeting and greeting everyone.

If you haven’t found time yet to come out to one of these great events we encourage you to put the next Adoption Fair in your area on your calendar and come out and spend a couple of hours with some great people and meet some great dogs!

Our volunteers arrived early in the day while it was still cool to help set up our booth at the Super Adoption Festival in North Hollywood. 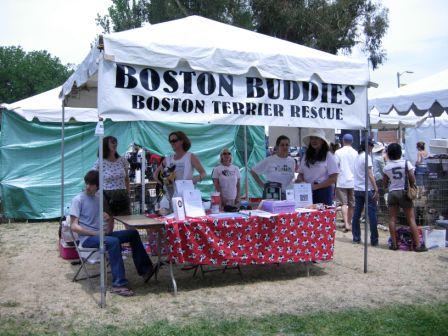 As the sun came out the temperature went up, and it was a bit warm – okay HOT – for most of the day – but that did not stop everyone from having a wonderful time!

Ricarda was kind enough to give Bessie a ride to the Festival and Bessie spent the day meeting and greeting all the people who stopped by the booth. 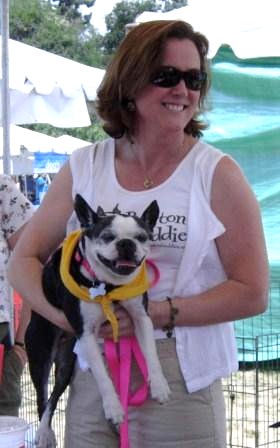 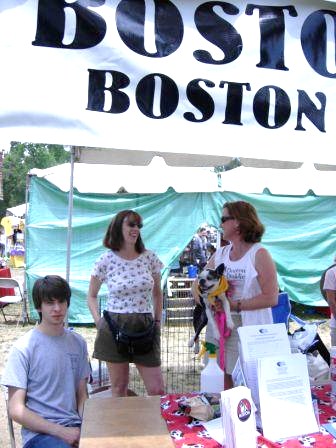 We had several volunteers come help staff the booth – Frankie’s new mom, Cyn, was there with Frankie’s Boston sister Aggie – when it got a bit too warm for Aggie they had to go home.  Jacob was there lending a hand and Dale Anne and Kay drove down from Ventura to help out and enjoy the festivities.

Our former Director and Treasurer, Judy Marks, came out for the day and Kathy brought one of her Boston Buddies alums, Katie, with her to help out in the booth.  And Betty was there organizing everything and keeping things running smoothly! 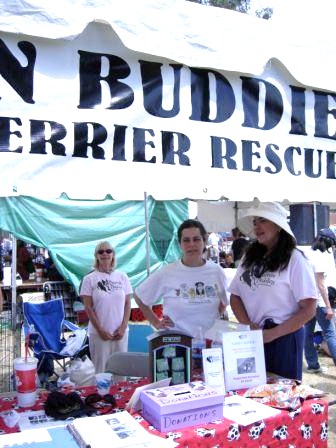 We had a lot of visitors stop by and say hello – Anne Mejia, one of the Founders of Best Friends, came by to say hello and see how Frankie was doing in his new home; Brandon Fouche, one of our favorite behaviorists from Canine Communications and a wonderful friend to Boston Buddies, came by to say hi and we even had a few Boston Buddies Alum come by, among them Frankie and Luigi – we always love to see Buddies Alum!

A good time was had by all and we can’t wait for our next Best Friends Adoption Event!

Several volunteers came out to the Murrieta Adoption Faire on Sunday, April 20, 2008, to help staff the Boston Buddies booth. 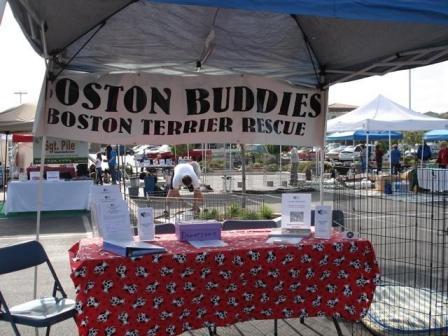 It was a sunny, but not too hot, day and we enjoyed meeting all the people who stopped by to say hi. We were set up right next to the ladies of Boston Brigade Rescue, another Boston Terrier rescue group that operates primarily in San Diego and Riverside counties. 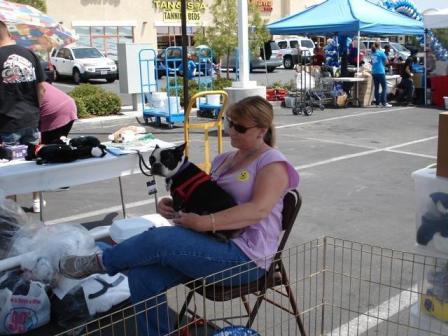 Two of our adoptable dogs, Ruby and Lulu, came to the Faire and had a wonderful time saying hello to everyone. 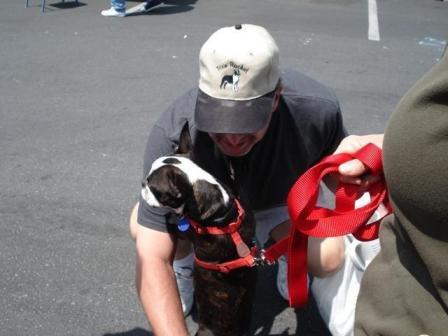 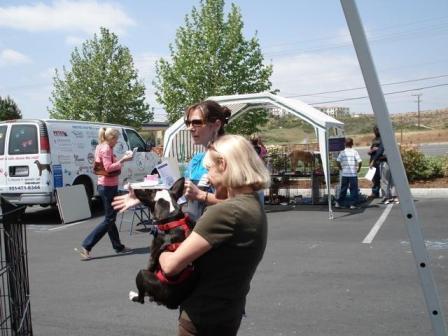 Kathy brought her own Boston, Angel, to the Faire and Angel truly lived up to her name and was a great ambassador for Boston Buddies.

By the end of the day everyone, especially Ruby and Lulu, was tired but happy to have spent a great day meeting lots of nice people and spreading the word about all the wonderful dogs in rescue that are looking for their forever home! 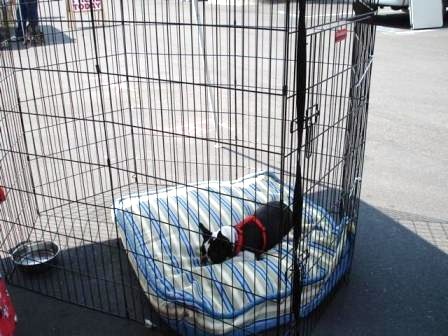 Lulu Taking a Break and Having a Snooze

DONATE
TO OUR
BUDDIES

Boston Buddies, Inc. is funded by your generous donations, our modest fundraisers, and in many instances from our members’ own personal funds. Many of our rescue dogs require extensive medical care and surgeries. Should you wish to help us with our efforts we appreciate donations in any amount.

All donations are tax deductible — we are a recognized 501(c)3 non-profit charitable corporation — and will help one more sick and homeless Boston find his/her way into a wonderful forever home.

Since our inception, we are honored to have assisted over 2000 dogs in their time of need and we strive to continue with this important work.

We thank you for your support!

Donations may be made via PayPal, or via US Mail.